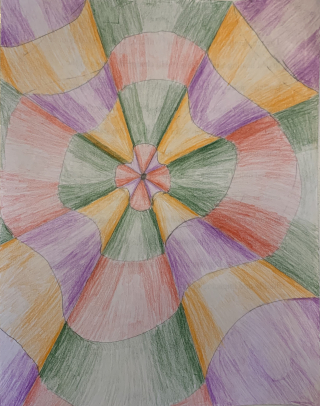 You live here to imagine, to hope, to believe in something better, but you cannot pretend. It’s why those of us who love it here love it so much, and why others can’t imagine living here. In normal times, you can’t pretend; in pandemics, you can’t even dream of it.

Inside your apartment is your life in a box. If you’re lucky, you love the people inside the box and they love you. You have food and drink and heat and cleanliness. If you are extra lucky, you have quiet and comfy places to sit and sleep.

You are extra lucky.

The minute you go outside you know how lucky you are. In a pandemic, when you hear a siren, or a bird, you know it’s not normal times. And the things you’re grateful for in normal times feel so insane now. You see the top of a tent on your daily “escape” walk to the park. A woman yells for help that she’s HIV positive on the corner and it feels even worse than in normal times.

That you as an individual - that we as a people could be so ill-equipped in a moment like this, that the fragility you have thought about in your most imaginative moments is as real as you feared. That might be the part that stings the most.

As a self-proclaimed realist that others call pessimist, you’re comforted by the fact that no one here has any time to pretend. These same people will be the ones to lead us out of this mess.

You often roll your eyes when you think someone is believing their own hype. New York may do just that to get to the other side of this. You couldn’t imagine it any other way.

It was the fall of 2011. My three-year-old was in preschool five whopping half-days per week and it was glorious. He had gotten a coveted morning spot which worked exponentially better for all of our schedules - including his one-year-old sister - than the two afternoons per week the year before. In one of our first weekly updates from the teacher, she announced they would be going a class field trip to a nature center. Out of town. On a school bus. What?!?! School itself didn't stress me out, but field trips off the island were a whole other story.

I did what any normal neurotic, anxious, fearful-of-death mother would do and got to work looking up laws about seat belts and car seats on school buses in New York! I mean, the West Side Highway and Saw Mill River Parkway are essentially race tracks! And buses tip over - like, all. the. time. It turned out that it was in fact against the law to put a three-year-old on a bus not in a car seat. Phew. I could couch my fear in the law - one of my favorite things to do! I'm not crazy. SEE! It's right here. But I didn't want my kid to miss the trip. So, of course, I drove him in our car. Yes. I. Did. He was too young to be embarrassed and I was too proud and self righteous and it was a great trip. And the bus didn't crash so those other kids got lucky too.

Flash forward to 2017. My now nine-year-old has been on countless school trips. I went on a lot of them in the early days. I was anxious about things like crossing streets and likely things like him falling off the subway platform. As time went on, I admitted to myself that I HATED going on field trips. It's not fun to be in charge of other people's children. It's not fun when kids misbehave or feeling like I have to tell them what to do. It's not enjoyable being vigilant. It's exhausting. It's not fun losing all the (flexible yet demanding) work time and figuring out how to get it all done. I still go sometimes - in a pinch - or if he asks - because I know I'm lucky to still be asked and because I get to learn cool stuff and because my schedule allows it.

I think part of my lessened fear and anxiety has had to do with my son getting older and me being more ready for him to do more as he experienced more of life without me and still came home at the end of the day. I had always worked, but mostly part-time and mostly from home, with him with a sitter within 5-10 blocks if not in another room for his early years. As he spent more time at school, with friends, at activities, I could breathe the tiniest bit deeper when he was away from me. My brain also had become occupied with more - juggling more work responsibilities and a second child left just a little less time to obsess and worry.

I've also actively worked on reducing my anxiety. For this particular representation of it, a few months of cognitive behavioral therapy (CBT*) was very helpful. I was going for pretty intense anxiety around some health challenges (other posts to come) and did some work to transfer some of what I was learning to the "I'm afraid my kid is gonna die" anxiety. I have been a fan of talk therapy for nearly 20 years and gone on and off over the years. After trying the medication route with not much success, CBT was recommended and I was in fact the prime candidate my doctor thought I would be. It's not perfect, and as my CBT therapist had to tell me more than once, his goal was to help me REDUCE the anxiety, not ELIMINATE it (which had always been, and still is - don't tell him - my goal). There would be spikes and valleys, he said. And there are. But thanks to that work, for the most part, I've been able to get down from the spikes more easily and more quickly than before.

He is on a trip to Ellis Island today. I don't even know how they got to the boat.

I better go make a call.

*I did not plan to mention CBT in this post and this is not an endorsement of it. It has been helpful to me, as have lots of other things. I'm certainly not a qualified medical professional and it would make me anxious if you thought I was.

Why I love my neighborhood...

I just ran out to the overpriced market across the street to get milk for my last "afternoon-coffee-that-will-keep-me-up-tonight-before-the-kids-come-back" to avoid the larger, less overpriced more crowded market a whole 2.5 blocks away to save a few minutes and some potential aggravation - including stairs!

Got the milk, made myself feel guilty when I saw the price, got 2 half gallons instead of one for no good reason and went to get in line. It was quite crowded - like, I had to wait. The gentleman in front of me had a NYC version of a full load of items (3 bags worth) which he took out of his cart one at a time and then was doing it for delivery so he had to fill out a form and it was taking a bit more time than usual...

While I was waiting, there was a ruckus in the line next to me and a customer was yelling for a manager and saying very loudly, "if she doesn't want to deal with the public she shouldn't work here...I'm the customer..." and more, including starting to call her names as he walked out of the store waving his arms and staring at everyone. I don't know what started it or who was right or wrong but my money is on the cashier not having done anything wrong...well, except, she did respond back with some swears after he called her swear names...but, I mean, come on.

The manager was there, told her quietly to calm/cool down, and then all I heard after that was customers offering support to her. Including the older gentleman in front of me (who, to be honest, I thought might have said something against the cashier based on an interaction I saw him start with an employee stocking shelves earlier, and just generally because I judged a book by its cover). He leaned over and said something about people being rude or something to that effect and then told her to try to keep her cool and not let them bother her.

No one - and there were quite a few around - really seemed to bat an eye, make a fuss, and she was thanking people. People say New York is this big scary place where everyone's anonymous. It's really not. Not when you live here. And, even sometimes when you don't. I know my neighbors (not the ones at the store today) and I believe in many small ways, we're all looking out for each other here* in ways not dissimilar from the best suburban and rural neighborhoods I know.

And, now I'm drinking my yummy iced coffee, with milk made from gold.

*Never was this more evident or meaningful than on 9/11, but that's another post or book altogether.