Not ready for what, you ask?

Not ready for Kindergarten, duh! I answer.

You smile, you may even laugh a little. I think it's [sort of] funny too, when I'm not busy trying not to cry.

Today is day three. B dropped him off - at the door - this was the last transition in the process.

He got a little upset and said that he wouldn't be able to find his classroom. B talked him through it and the principal introduced him to the "big" kids (1st & 2nd graders) who would escort him upstairs. He recovered quickly on his own and walked in with confidence. Just like any parent would want, right? Except B and I are both trying not to cry and he's probably already coloring pictures in his class.

On the second day, I was late to drop him off. We were ready an hour before school started and live a block away from the building. We had two "issues" just before we were to walk out the door - one requiring a full outfit change of a toddler - and, well, we were late by 4 minutes. All the other kids were seated in their seats already [though on the way out, I saw another much more relaxed seeming mother walking her son in too...]. It was a rushed goodbye b/c I was afraid of breaking the rules and getting in trouble [yes, seriously]. He blushed for one of the first times in his life, which made me feel even sadder and guiltier. I'm a blusher and it's usually not any fun when anyone else notices. Again, he said goodbye and went with his teacher to hang up his stuff. It took me the whole day to shake it off and I made sure I was one of the first in line to pick him up.

On the first day, we mostly got it right. Though they asked us to leave the room when I was in the middle of reading a story to him and I really didn't want to leave in the middle of the story. I mean, didn't I owe it to him to finish the story? He wouldn't know what happened in the end if I left now. I started to leave, then I started to read the next page, then I left because, well, I felt silly trying to rush through the story as other parents were leaving the room.

Everyone said it'd be harder on me than it would be on him. And I did believe that, I did. I knew he was ready. Not a doubt in my mind. And I thought I was ready too. He needs more stimulation, more learning about "school" things. He's ready to be in big kid school. And selfishly, his moving on is one signal in my path to feeling okay about working more and continuing to re-expand my professional self. I've even joked with people about L being ready for more than her "silly" 2 mornings per week of preschool b/c I selfishly want the time for work without having conflicting feelings about it...or paying for additional childcare.

Because he was ready, I thought I was ready. I changed my mind. I want him back. Right now. And, I do not care at this moment that he is so clearly ready, and that somehow I can take some credit for that. I don't want the credit, I want my H here running around, drawing pictures, playing and fighting with his sister. Kindergarten sucks.

I'm even more upset now because I know that if this is my reaction to Kindergarten, I'm in big trouble for the next 30+ years. This nonsense is exhausting. 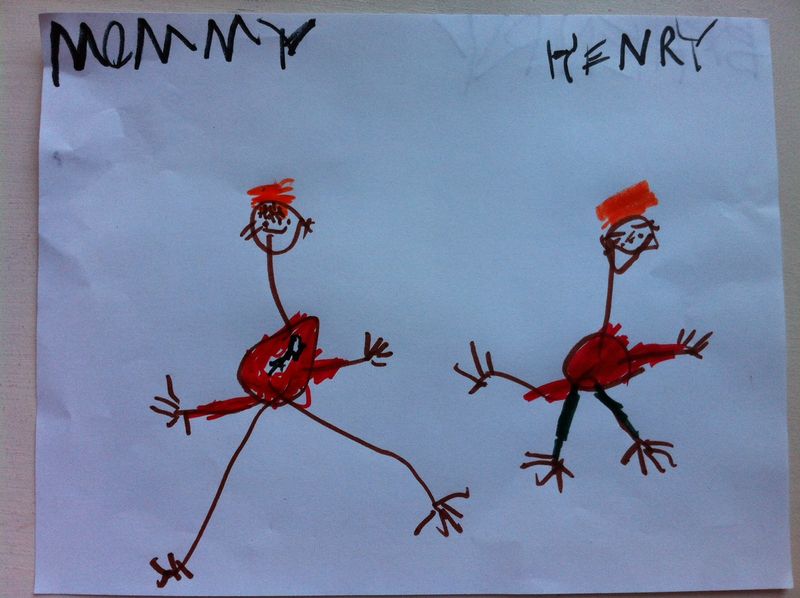 H drew this pic this morning before school. Overheard: "I'm going to draw a picture for mommy because she's so cranky." A few minutes later he came in to see me in the shower: "I need to look at you. Is your hair brown or...oh, it's orange." Ah, if only it were developmentally appropriate for ME to be that self-centered....

P.S. I'm pretty sure that's my heart ripped out of the middle of my chest.

Jumpstart's Read for the Record 2011

My regular readers know that I have worked for Jumpstart, an early childhood education organization, not once, not twice, but three different times during my illustrious career. The organization's pull on me has been strong for several reasons, but the most important has always been the mission, to ensure EVERY child in America enters school prepared to succeed.

Tomorrow marks the SIXTH annual Jumpstart's Read for the Record, during which more than TWO MILLION adults and children will read Llama Llama Red Pajama together across the country to bring attention to the importance of HIGH QUALITY early education for ALL children.

Please pull out your copy to read with your child(ren), read it online HERE(English) or HERE(Spanish), and/or watch it being read by the author, Anna Dewdney, HERE.

Please register to be counted as part of the new world record and check out the national coverage of the event on NBC's Today Show tomorrow morning (Thursday, October 6, 2011)!

This year, I'm reading to Henry's preschool class in the morning and taking Henry and Lucy to Starbucks to read it again in the afternoon. [Starbucks is having Read for the Record events at 26 locations in NY. Check HERE to see if you can go to one near you!] We might even read it again at bedtime just for kicks (don't worry, we will only count each one of us once).

And, if you want to see the personal impact and importance of the work Jumpstart does every day to address the early education crisis, please read THIS PIECE by a Jumpstart volunteer on The Huffington Post.

So H and B survived H's first day of preschool. They encouraged B to stay in the room (along with parents and caregivers of the other new kids in the class) and I think it may have had the opposite of the intended effect. H knew B was there and obviously wanted to play with his BFF, so B wound up staying in there the whole time, engaging, not engaging, explaining, and trying to get H to engage with the rest of the class.

There was also a sock incident. In this facility, it's no shoes allowed (super plush carpet in the gym and nice padded wood flooring in the classroom), which I love, but it is also a no sock facility (which I don't) to prevent kids from slipping. During the early part of class when B was in the room but on the side, one of the teachers attempted to take H's socks off and it was the straw that broke H for the remainder of the session. And it nearly killed B to watch the sadness that ensued, as short lived as it may have been. My poor boys. They were both definitely exhausted by the end of the two hours, perhaps B more so than H. Other parents had been able to leave, while some were in and out (potentially even more confusing for the children), but it was a mixed bag of a day. Lucky for them both, B took them to a diner for grilled cheeses to recover before nap time.

When H and I talked about it later, he said "I go to school today. My daddy stay in there." He knew that was not the goal, but seemed to be perfectly okay with it.

Having the benefit of B's experience behind me, when I took H on Thursday, in addition to all the talk in the morning about how it was going to go and how mommy was going to wait outside in case he needed me, I decided that if they would let me, we would do the rip-the-Bandaid-off version of separation instead. And lucky for me, this was actually the plan for day 2. All the caregivers that were in the room at the start of class were asked to leave about 10 minutes in. H had started playing at a table with me about 3 feet away and reached out to me as if his feet (in facility-approved/suggested slippers) were glued to the floor but he needed to touch me. Minutes later he was between my legs. I alternated between telling him the plan and giving him encouragement to play with comforting him by just sitting there with him.

At 10 minutes, someone came over, I said my brief goodbyes and they peeled him out of my arms crying. There were a good four or five kids doing the same. We went out in the waiting area and, well, we waited. A few minutes later, another mom came out (she had arrived late) and said no one was crying anymore. About 5 or 6 times during the two hours, either a mom who had gone in to check or one of the teachers would come out and give an update and by all accounts, H was engaged, playing, even "doing perfect" by one mom's account. I got the thumbs up later from another teacher during a transition. I was relieved and proud (which felt weird to be, but I was).

The bonus to the day was meeting a new potential mommy friend, whose son was also having some anxiety, as was she. She's expecting her second as well and we even share an OB. Did I mention she works in early childhood so we got to talk about all of our strong opinions about what these programs should and should not look like and she told me of another quite reputable program from which she and another mother there had pulled their kids a few weeks earlier.

At the end of the two hours, we went in to the little pick-up/transition area and the kids came out to see us. H was happy to see me, but I wouldn't say he was over the top about it. He told me how he went on the bars (in the gym) and then after about 30 seconds, got down and went over to play with some trucks. I spoke with two of the teachers (they initiated - how nice) who told me some specifics of the day's activities and how well H did in terms of being engaged with the class the whole time - even more engaged than he had been during the semester where the parents were there the whole time. Rock on, H!

I actually had to coax him into getting ready to leave, and as we were putting coats on, he suggested that "Mommy go out there" as he pointed out the window, and I think he intended to stay. I left feeling good about the program, good about H being ready for it, excited to meet a potential friend, and thinking that maybe I could get things done during those two hours every week - even if that meant successfully eating a pain au chocolat and hot chocolate while reading...hmmm.

We "tour" (with H) the one preschool we have applied to for the fall, on Monday. Stay tuned.

B sent me this interesting op-ed in Sunday's NY Times about what teacher education programs should look like. I am not sure many people would disagree with the premise - I certainly don't - but implementation is the key and there's a lot of there there. Having gone through a teacher preparation program at an institution that definitely looked down its nose at teaching and that got half of this right and half of this wrong, I'm not as hopeful as I want to be at our collective ability and initiative to make this happen and quickly enough. How do we do it? Who is going to step up and take this challenge?