Vroom has two meanings in my life as a mom:

As a member of Mommies Clique, I was recently given the opportunity to try the Vroom Solo out in my home. 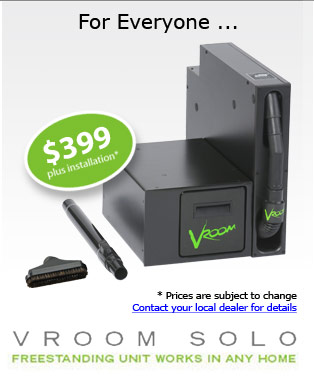 H-P Products, the maker of the Vroom, has a long history of making vacuums, and also has a version of the Vroom available for use with central vacuum systems at $199.

I installed the Solo under my kitchen sink. It only took about 15 minutes and most of my stuff fit back in on top of and around it. The Vroom even includes a small piece of lining to make it easier to use its surface as a shelf. The instructions say NOT to use the outlet that is associated with your garbage disposal, but that was my only choice without rewiring, so I unplugged the disposal and flipped the switch. And vroom, Vroom. My first test of the Vroom convinced me to relocate our family's (read: my toddler's) eating location to take advantage of the Vroom's capabilities. Some highlights:

Go to the Vroom web site to see a video of the Vroom in action and to register to win your own Vroom!

The comments to this entry are closed.